I wonder sometimes if God has a great sense of humor. TV stations spend enormous amounts of money for Doppler Radar and other weather intel technology and the salary for someone with a degree in meteorology to tell their viewers what the weather will be. And, sometimes they get it right. At other times they miss it a mile!

The best in the business are those guys who predict major storms each year, especially hurricanes. They have been wrong much more than right at least for the past five years. What becomes glaringly obvious is that weather is out of our league. God alone knows what the weather will be in July, or tomorrow.

Working as a weatherman, or weather-woman, or for my more politically correct readers, weather person is a thankless job with built-in opportunities for lots of people to be mad at you much of the time.

Weather, medicine, and many other disciplines have experienced huge advances in technology and have helped mankind as a result. But, with all of that wonderful tecno-stuff and smart people to use it no person can say with certainty what the weather will be tomorrow afternoon in your town and the best doctor in town can’t cure a common cold.

At times we seem to think we humans have everything all figured out and are self-sufficient. Wait…not so fast there, it just an’t true. I am thankful for technology, and even for the local weather man, but he is infallible.

These tips can help you to predict the weather and are almost as accurate as the best weather station.

Someone came up with this weather station for the poor man. 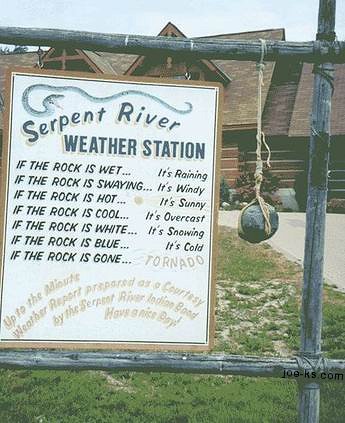 It works perfectly every time!

Carol and I had a wonderful Thanksgiving meal at the home of friends from church along with several others, (there were 19 at the table), and the food and fellowship could not have been better. This morning I had coffee and read the local news paper in my comfortable home in front of the fire place. While I am enjoying the best life has to offer in my opinion a guy named Mike Bumgartner is preparing meals, unloading trucks of appliances and food, and sharing the love with volunteers and residents of the gulf coast community of Port Bolivar, Texas.

Mike is a Florida resident whose heart was touched by the Lord after the storms ploughed through the gulf coast of Texas and Louisiana. With little other than the love of Christ in his heart and a desire to help the hurting Mike hooked his 5th wheel trailer to his pick up truck and drove to Texas where at once he started cooking meals for displaced residents and those who had volunteered to help them. We met this great servant face to face at the Broadway church of Christ in Galveston several weeks ago. The day we wre there, Mike and a few helpers fed about 800 people a hot meal in the name of the Lord.

Mike and his ministry, “Disaster Assistance”, has prepared thousands of hot meals in the last few months at several locations along the Texas coast. You can see his work fist hand at the ministry blog http://www.mikesmissionupdates.blogspot.com/ . Mike Bumgartner is a great man who is worthy of your support and prayers. His ministry partners Don and Rosemary Hudson have also been great supporters, serving meals, washing pots and pans, and sharing the good news about Jesus to those they feed. You can also read Don Hudson’s blog www.donchudson.blogspot.com for more information about his ministry and Mike’s as well.

I am thankful for these “Infantrymen for Jesus” who are putting the story of Jesus in shoe leather, serving God’s love up a plate, a smile, a hug, and a Bible study at a time. God’s best to these great servants!

Twins with one heart!

Jane Smith and Judy Peter are twin sisters from El Campo, Texas. They are very active members of the El Campo church of Christ where my friend John McCord is the preacher. We first got to know this “dynamic duo” as a result of our joint work in the South Alabama town of Bayou La Batre. These ladies are like servants on speed! (I mean this in the best possible way) They are high on Jesus and want to serve people in His name and make Him known to everyone possible.

The winds of Hurricane Ike had hardly died before Jane and Judy snapped into gear gathering ice, coolers, water and food for those who had been devastated by the storm. They loaded a pick up truck and were off on a trip that would be repeated time after time in the next months. It is amazing what these two gals have done! Just ask Mike Bumgartner with Disaster Assistance and you’ll get an ear full of wonderful comments about them.

When Carol and I recently visited several churches and hard hit communities, these delightful twins insisted on treating us to a beach front lunch of scrumptious hamburgers and the very best onion rings. After a great visit we followed them to the relief site where Mike Bumgartner was cooking up a storm and preparing to serve 800 or so meals. I was recruited to help unload the twins truck. They had huge cans of vegetables, drinks, cleaning supplies, and other things hurricane victims need. What for us was a big deal for them has become routine. They seem to think nothing about getting in the aged pick up and driving a few hours to deliver the goods, most of which I suspect they paid for out of their own funds.

If I could lawfully clone anyone, I might just start with these dear sisters who know no fear, see no obsticles, and can get more done than a small army. My hat’s off to the “Turbo Twins” from El Campo. What a joy to know them and their families and to have them as friends. You go girls!!

It doesn’t seem that long ago that that we were gearing up for what would be WFR Relief’s greatest domestic challenge, Hurricane Katrina. It’s time again. As I type this post Gustav is due to make landfall just west of New Orleans as a catagory 3 hurricane with winds of 115 mph. I am very thankful that state and local governments, FEMA, and the residents of the gulf coast are much better prepared because of lessons learned well from Katrina and Rita.

It is very likely that Gustav will not be nearly as bad as Katrina but it will still leave thousands of homes and business flooded from the expected 15′ storm surge. Thankfully about 90% of the residents of the hard hit areas have evacuated. But when they return they will need lots of help mucking out buildings, hauling debris, cutting downed trees, etc. WFR Relief is ready to help.

For over 35 years WFR Relief has been the clearing house for information, the distribution of volunteers, materials, food, water, and money. I have alwys been amazed at the generosity of church of Christ people who open their check books to assist those who are hurting after a natural catastrophe. I know many of my readers will want to give what you can to help. Please consider going to our website to make your contribution. It is easy and simple. Click CONTRIBUTE to give.

If you have questions, have volunteers who want to help, or need to talk to us for any reason please call 318-396-6000 beginning Tuesday morning. Until then you can contact my wife Carol Ogle, the Relief Coordinator for WFR Relief at 318-348-2291. My hope is that the storm will diminish somewhat before it makes landfall. It looks as if it will hit the most suitable area of the gulf coast where there is fewer residents than any other stretch of shoreline.

There is another storm gaining strength and predictions, although early, have it going to Florida or further up the Atlantic coast. There is much to do. We need people and funds but more than that we need your prayer support. Thanks for your concern and consideration.