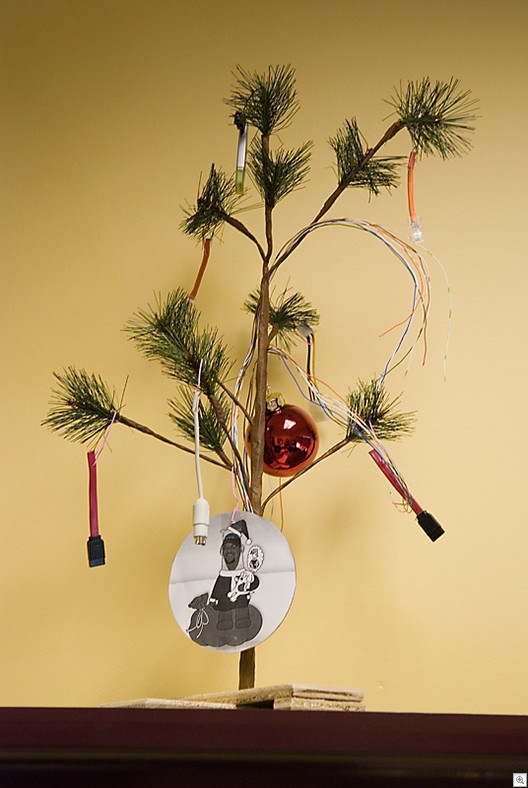 You probably wonder about the Christmas tree. It closely resembles some of the trees my father would bring in the house and decorate when I was a child. He had the worst decorating tastes of any person I have ever met. As daddy entered a field of scattered pines, the first tree he saw that resembled a pine fell victim to his axe. Even if a couple of limbs had to be wired on to make it acceptable that was no problem. The same two strings of lights were used for perhaps 20 years. There were colored light bulbs with colored metal reflectors held in place by screwing the bulbs in through them. There were two strands of garland, one silver and one red, which after a decade or so began to look like shiny twine, not garland. Some of the early years would find daddy with some sewing thread, a needle, and a bowl of pop corn, stringing it up to add more color to the tree. At its best it was always only slightly more attractive than the one in the picture. Mom was blind so daddy got away with stuff most husbands would have been maimed for! But, it was Christmas and we were happy.

At least once a year, daddy would mention that Christmas for him, when he was a boy, was an orange, and perhaps a few pieces of hard candy. It was a true story. My grandparents had 13 children and lived a very primitive life back in the hollers and way up the creeks in Yancey County N.C. We had it good compared to those days and my parents never took it lightly.

My favorite Christmas memory was getting a bicycle one year. It was a hand-me-down from a 1st cousin that daddy had painted red with a brush and it looked like it. But, I was thrilled to have my own bike and it was a wonderful gift. My grandson’s haul, and the huge boxes that were mailed off to granddaughters, are a stark contrast to those days of finding so much comfort in just getting by.

This is from part of a post I wrote in Dec of 2007. It brings back a flood of memories, good memories, ones I’ll cherish forever.

Sadly, working a full-time job has really limited my time to write, something I love doing. It seems that there is never enough time for it. Perhaps I need to make better use of the time I have. We’ll see about that…

Meanwhile I hope that you and yours have a wonderful holiday season and that you keep first things first. May each of us treasure Christ in our hearts above all else. Of all our affections He should be supreme.

4 comments on “Our Christmas Tree”