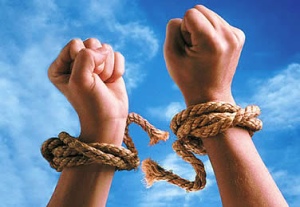 “Therefore, since we have been justified by faith, we have peace with God through our Lord Jesus Christ.” (Roman 5:1)

“There is therefore now no condemnation for those who are in Christ Jesus.” (Romans 8:1)

In Romans 5:1 we have the promise that  we presently “have” peace with God. This is not speaking of the “peace of God” which we can also claim. But rather it is the opposite of being at odds with God because of sin.

We are in this joyful state of being at peace with God “through” our Lord Jesus Christ. He is the ground and basis of our peacefulness with God. There can be no peace with God except through him.

Then there is the first part of the promise “we have been justified by faith”. This is bedrock truth stated in the past tense. Paul’s letter to the Romans begins by giving his own apostolic credentials and he then mentions those to whom the letter is addressed.

So the letter is not addressed to all Roman citizens but to those specific ones who are “called ” to be Christians, “called” to belong to Christ. Next Paul tells them why he thanks God for them…

“…because your faith is proclaimed in all the world.” (Romans 1:9)

He was not thankful for them because of their charitable work or that they had a big missions budget, but rather because their “faith” was well-known across the whole world!

And so it is, we have been called to Christ and have been justified by faith in Jesus Christ. Christ alone is the ground of our faith and hope. He alone is the way to God the Father. It is his worth and work that set us (past tense) right with God so that by his saving and satisfying acts we right now have peace with God. This is one of the “Gospel Bookends”. The other now follows.

“There is therefore now no condemnation for those who are in Christ Jesus.” (Romans 8:1)

Condemnation is missing! The one who puts his whole trust in Jesus at once goes from “condemned” to “uncondemned”. Isn’t this precisely what Jesus told the Jewish leader Nicodemus when he came inquiring about him?

“Whoever believes in him(Jesus) is not condemned, but whoever does not believe is condemned already, because he has not believed in the name of the only Son of God.” (John 3:18)

Not Condemned? “Whoever believes in him (Jesus).”

Now Condemned? “Whoever does not believe…”

It is true that those who put their whole trust in Jesus are not condemned, but more than that they will never be condemned. Jesus said these words as He addressed a huge gathering at Capernaum.

37All that the Father gives me will come to me, and whoever comes to me I will never cast out. 38For I have come down from heaven, not to do my own will but the will of him who sent me. 39And this is the will of him who sent me, that I should lose nothing of all that he has given me, but raise it up on the last day. 40For this is the will of my Father, that everyone who looks on the Son and believes in him should have eternal life, and I will raise him up on the last day.” (John 6:37-40)

Jesus states the Father’s will twice.

“…that everyone who looks on the Son and believes in him should have eternal life, and I will raise him up on the last day.” (vs 40)

And in those two consecutive verses Jesus makes it plain that every person who trusts in Him will be raised from the dead. Eternal life is a present, permanent, possession.

My hope is built on nothing less
Than Jesus’ blood and righteousness.
I dare not trust the sweetest frame,
But wholly trust in Jesus’ Name.

When darkness seems to hide His lovely face,
I rest on His unchanging grace.
In every high and stormy gale,
My anchor holds within the veil.

His oath, His covenant, His blood,
Support me in the whelming flood.
When all around my soul gives way,
He then is all my Hope and Stay.

When He shall come with trumpet sound,
Oh may I then in Him be found.
Dressed in His righteousness alone,
Faultless to stand before the throne.

This old hymn states it well. Edward Mote wrote these truth filled words in the year 1834. In the following 176 years no one has discovered any Bible truth that is more foundational, that make us more secure.

We have been justified, we now have peace with God, and we have no condemnation because we are in Christ Jesus the Solid Rock.

3 comments on ““Not Condemned””